The Importance of Following The Dream.

I have at last and after some careful consideration, found the perfect location to set up the centre for community ceramics / International residency in Siwa.

I have a head full of ideas about ways of moving forward with this, slight apprehension re distance but nothing that can’t be solved down to earth communication. Overall I have to surrender myself to everything happening at Siwan pace while bearing in mind, for example, that much of the repair work can only happen in the hot summer months as that is what the karsheef needs to ‘dry’.
The work will be done in several stages. InshAllah, there will be many future blogs on the development of both the renovation of the house and my sketchy "what the centre is going to be used for" ideas.

I am also stepping up my doctorate application. So it's all systems go here. For now, I endeavour to spare the reader of my ever-meandering thoughts by keeping the focus simply on the building and location. 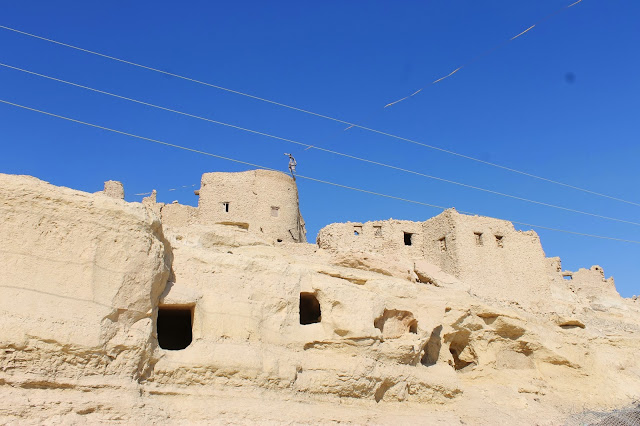 The house is the taller of the two. High on the list of priorities regarding the renovation of the building is the reinstatement of the curved walls. There looks to be a repair job gone awry at the front of the house with a sizeable crack requiring attention. I am reassured that it is relatively easy to repair old karsheef and that this traditional building material of salt brick and mud can be reused. Karsheef construction is entirely unique to Siwa Oasis. I hear that there are only three or four locals who have the expertise today. I will be honoured to meet such a craftsman. 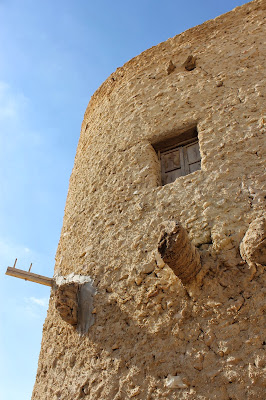 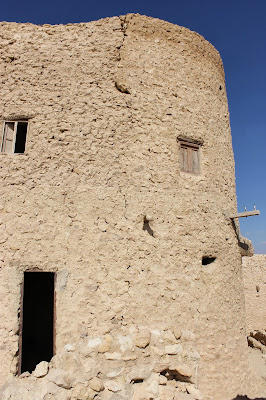 The crack that will be repaired as and when that section of the wall is rebuilt & the present door that may or may not remain. 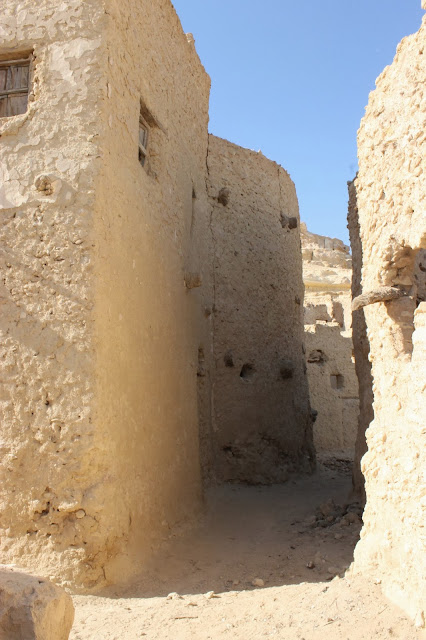 Northernly aspect including the old Siwi toilet area that I think was used by neighbouring houses/s. It is very important to me to keep the curve despite its present bad state of repair. The blocked up front door, whose use is soon to be revoked, is just visable before the wall curves out. 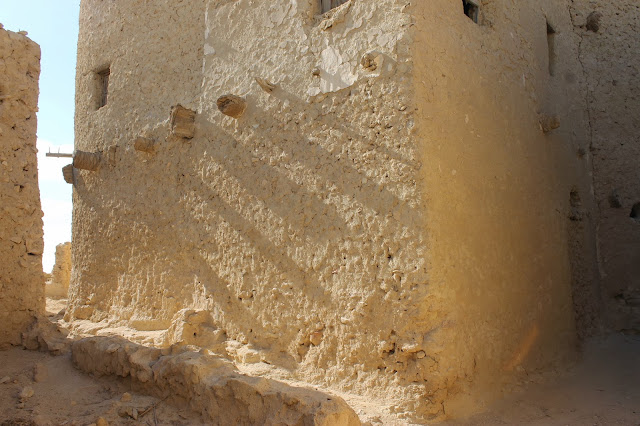 Looking East. The old front door that is blocked up on the north facing facade ( where the summer rooms are traditionally positioned.) 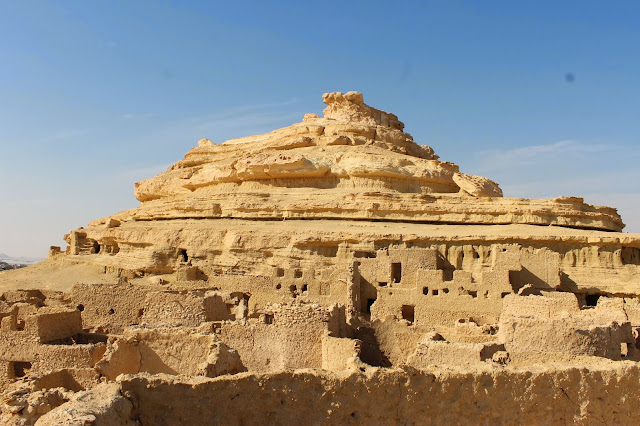 And....saving the best until last - the utterly amazing roof views. I could do a blog alone on the views from the roof! Though perhaps a novel would be better! 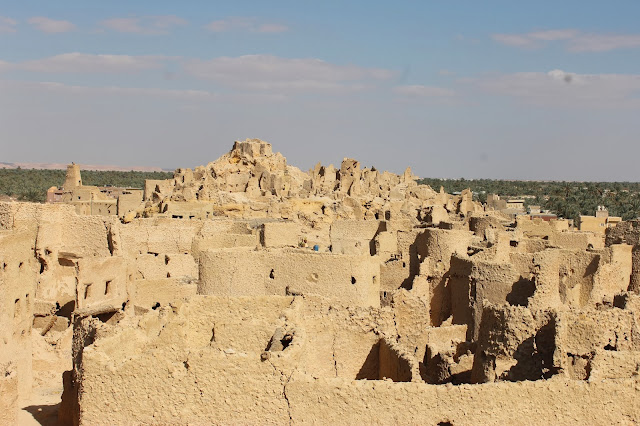 Incredible IS the word; view west towards the ruins of medieval Shali.

And now for the interior of the house, as promised.

In praise of curvature.

Not sure if this part of the roof was dismantled when electricity cables were ran into the house - never to be replaced. Or, perhaps it was already the room with the hole in the ceiling for the winter fire. I am not familiar with how big the so-called chimneys would have been in this case. I have a book with some interesting information on the traditional layout of a Siwi house. I must get round to posting some of that information here. Anyway whatever the story behind the gap in the roof, I am happy for it to be open to the elements as the delightful curve ( I'm eyeing as a bedroom ceiling), is due for some tlc anyway. 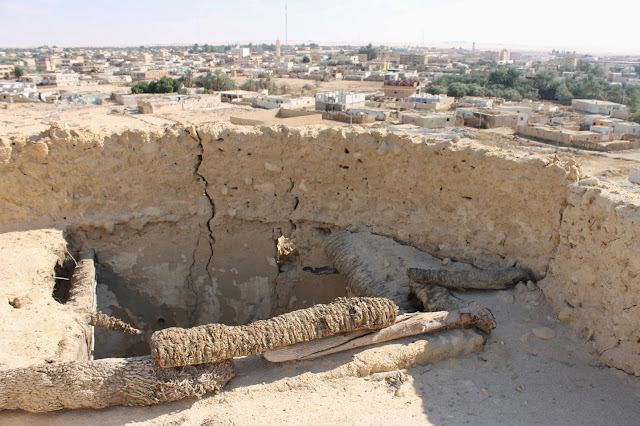 This is the corresponding curve below.

I have plans to knock through one of the walls and make an extended kitchen area. But we will have to wait and see what will happen with the dubious water-to-be-piped-up-the-hill situation. 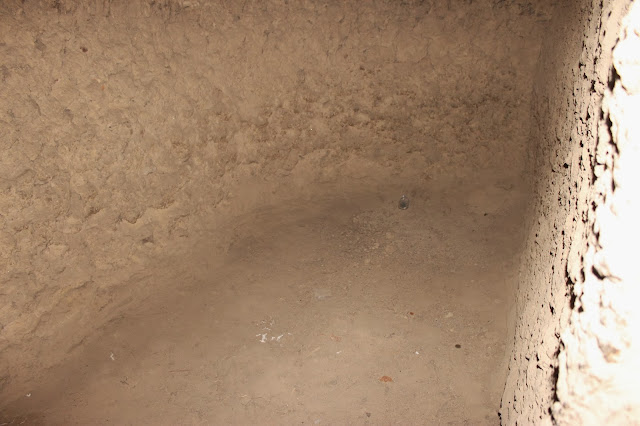 The house has a circular layout of rooms. Well sort of. Or it would have had once, as far as I can make out. I would need to knock an entrance way through one of the walls to reinstate this and I fully intend to providing it is structurally safe to do so. it. There was an old kitchen area, I recognise the broken bread oven,  - now no more than a derelict yard, and not a part of my property, that would have originally been the interconnecting section. ( I am actually making enquiries as to whether I may be able to cheaply purchase these, very derelict, couple of rooms. There appears to be a common wall between two of my rooms that I am hoping will facilitate this idea. I am presently trying to arrange to have a local engineer-somebody to draw me up plans so I can, inshAllah, all-will-be-well work from this premise. 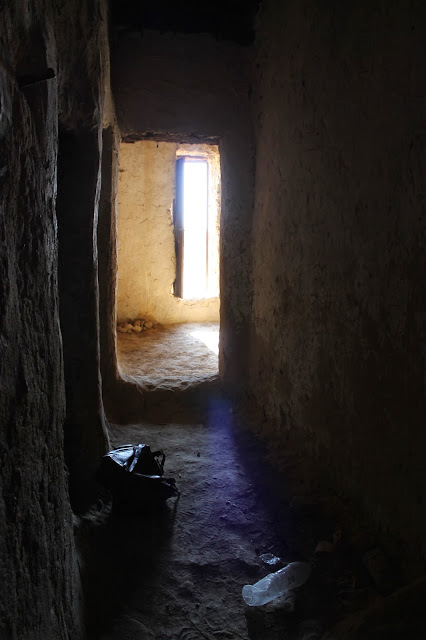 The circular layout extends to the 1st floor (and roof) - below picture a blocked-up door I
can't wait to bash down in order to recreate this original flow. 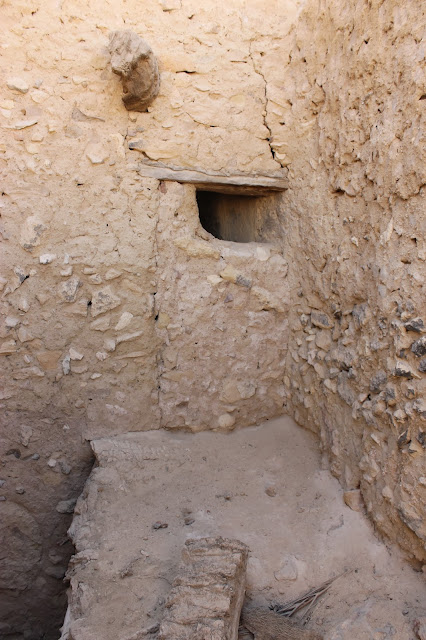 The beautiful (to-be), traditional west-facing (towards the town), front door.

Can't wait to knock out the old and attach the new. The door deserves a blog post to itself and it will get just that with accompanying pictures of a whole selection of ancient doors ( taken at one time from Shali?) that intrigued me greatly one day we spent out nr Taziry! 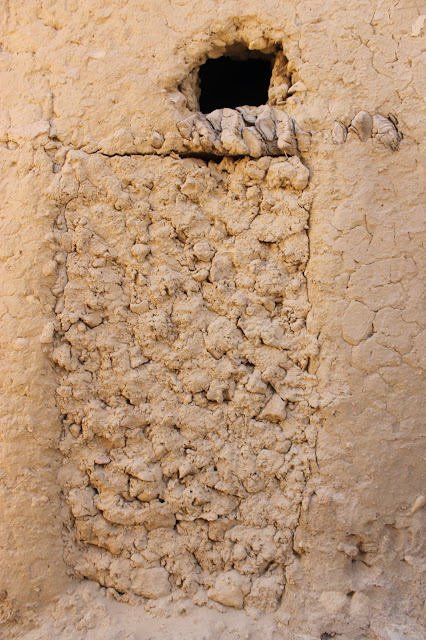 I am simultaneously working on a short video which I will post when finished. Or at least a first edit. I just tried uploading a video still to this blog to demonstrate what I consider to be the finest feature of this very staircase, for you can hardly see it here - as I took the photo in somewhat of a hurry having left a bored 17yr old in the hotel room for an hour or two on our final day - The finest feature, in my very humble opinion, is simply the reflection of the curve at the top of the staircase leading to the roof area, on the right hand wall. Like I said it is clearly seen on the short video I am in the process of working on. The wildest of my Grand Design schemes entails knocking out the central core of the building and creating a light shaft in the manner of Andalusian house; with a central courtyard. It would be a very small courtyard of course! And I really don't know how feasible this is brainchild is. 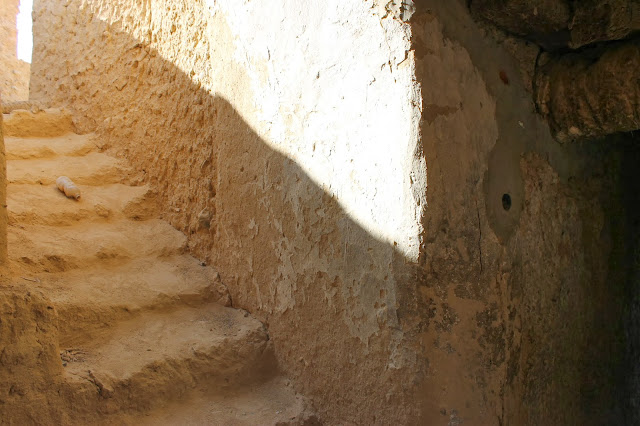 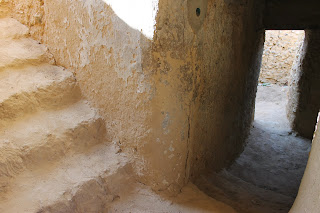 Posted by Zeneb Maghrebi at 2:58 PM